I wanted to try reformer Pilates for 3 reasons: Minimal sweating so I could do it before work without having to wash my hair after class, everyone I know who does it has incredible abs and the class itself looked like it was just a bunch of people chilling in a bed while pulling some ropes. So when I realized that there was a reformer Pilates studio right in front of my favorite Venezuelan restaurant which is also 3 blocks away from my apartment I thought to myself: Aha! This is where I’ll swipe my reformer V-Card. 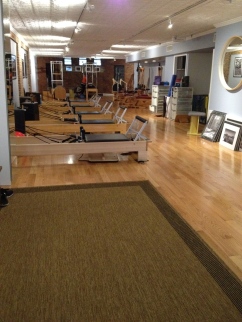 Chelsea Movements is located in the basement of a nondescript building on 18th street. But once you enter it you realize that they actually have a HUGE studio down there. It doesn’t have a particularly catchy color scheme, the most outstanding thing about it would probably be the exposed brick wall. The studio has super calm vibe, no music which sometimes combined with the super chill vibe made me very sleepy during class.

The studio is not a trendy one at all, its  clientele consists of a lot of older people who go there for private sessions and people who live around the neighborhood. But realistically speaking, if you are going to get an amazing workout who cares if celebrities and beautiful people are taking class with you. You do see the occasional Lululemonite but that also has to do with the fact that the studio is in the heart of Chelsea.

The staff is super knowledgeable and most of them have been teaching Pilates for over a decade. My favorite instructor is Benjamin Oyzon who is a former dancer/burner who now teaches pilates while simultaneously sharing Burning Man and other festival stories. That might actually be the reason why I like taking his class so much. They only have 5 reformers so even if you take a group class it feels like a private because the instructor gives you a lot of personal attention. I only took reformer classes but they also offer Gyrotonic, Tower and Cadillac classes. In the studio they also have a lot of props (bumpy balls, blocks, rings, resistance bands, etc.) to help you position and align yourself for different movements.

Overall I was very satisfied with my experience at Chelsea Movements. I took about 15 classes in the studio and definitely saw improvement in my body and posture. The no sweat factor was also a big motivator to take more class and I can confidently say that this is studio offers unpretentious Pilates, which in New York City is very rare. Most people at the studio are regulars which I think says a lot about the studio itself. I also learned that reformer is not just laying on a bed chilling and pulling a bunch of ropes, the class is HARD and the fact that you don’t sweat doesn’t mean you won’t sweat your ass (or abs?) off.

One thought on “Reform School.”